"And last but not least, there is not a more beautiful place to study than San Sebastian" 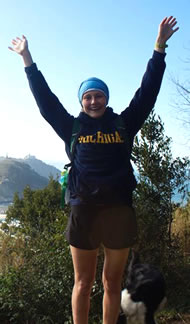 I was lucky enough to spend five months studying at Tecnun in San Sebastián, Spain this past year. While I arrived scared out of my mind to live in a foreign country and take engineering classes in a different language, this feeling quickly went away as I learned to love all the new adventures and learning opportunities a study abroad experience offered.

As a student from the United States, the University of Michigan specifically, the Tecnun international program was very different than many other study abroad programs I looked at. And ultimately I chose the program because it was different. It wasn’t a big program specifically designed for USA students. This meant I wouldn’t be going abroad with a large group of other students from my country. Instead I was excited to see at Tecnun’s international student orientation that we were truly an international group – students from Europe, South America, China and Mexico. And the international group was small enough that during the semester we all got to know each other very well. So while I learned so much about Basque and Spanish culture during my time in San Sebastian, the international program helped me learn about different cultures from all around the world. While it was challenging going without a big group of Americans, it was worth it. It forced me to step out of my comfort zone and see the world in a new way.

In terms of the academic part of the experience, the classes at Tecnun were small enough that it was easy to get in touch with any professors if you had questions about the material. And as I was a native-English speaker taking my classes in Castilian, I found all the professors to be extremely helpful and patient if I didn’t understand everything. I thought it was great that Tecnun offered classes in English and Spanish so that students like myself who wanted to improve their Spanish could do so, but students who didn’t speak Spanish were also able to take engineering courses.

And last but not least, there is not a more beautiful place to study than San Sebastián. From the gorgeous beaches to the lush green mountains, from the beautiful downtown and parte vieja to the coastal trails, I feel so lucky to have called such a magical place home for five months.